On a crater rim in one of the two polar regions of the moon, very high-resolution cameras could permanently record earth close above the horizon of the lunar surface and transmit that signal live to Earth.
A permanent live image of our home planet in super high resolution could be a people connecting message. We all would be able see a live picture of "earth phases", eclipses of the sun and with lunar eclipses the red glow of the earths atmosphere.

From the Earth, the daily Moonrise and Moonset are always inspiring moments. However, lunar astronauts will see something very different: viewed from the lunar surface, the Earth never rises or sets. Since the Moon is tidally locked, the Earth is always in the same spot above the horizon, varying only a small amount with the slight wobble of the Moon. The Earth may not move across the "sky", but the view is not static. Future astronauts will see the continents rotate in and out of view and the ever-changing pattern of clouds will always catch one's eye.

To be able to estimate the ability to realize such an idea and the costs, I have asked an astronaut and head of Chair of Astronautics at Technical University of Munich, Prof. Prof. h.c. Dr. Dr. h.c. Ulrich Walter. Here is his ansewer:

positioning 8K cameras on a crater rim in one of the two polar regions of the moon is a dream of the future, because we first have to return to the moon (2024) and only on follow-up missions (2028?) we might position cameras on crater edges with live transmission. There is no space nation, which has such thoughts at the moment. At the moment it’s all about how we get back to the moon (techniques, money).

Unless you also provide the money for your idea. What is needed is an estimated € 500 million. You do not need manned missions to do this, but a few unmanned missions will do, such as SpaceIL (Israel), which offers around € 100 million per mission.

Many greetings
U. Walter

The rendered video sequence above is a principal proove of Earths very vaint "wobble" in the moons Sky taken from the Space Engine software.


The next video gives you an impression, how close our live camera recorded picture of the earth could look like. I believe that we will more likely experience image outputs from static mounted cameras in the future, because of the possibility to watch super high vision (8K) in projections or flat screens. This has something to do with the presentation on such large, high-resolution displays: who wants to follow quick pans or quick cutting sequences on his living room wallpaper? An example for a live programme of the future could be the broadcast of football matches taken by a fixed-mounted 8K-camera. This would give the viewer at home the feeling of actually sitting in a VIP lounge in the stadium and seeing the match 1:1.
If we do a close shot of earth from moon, the camera has to track earths move left to right and back (maximum 12°). At the same time we need some changeable filters to protect the camera when the sun direcly passes behind earth at a lunar eclipse. In this case you would more likely call it an earth eclipse. 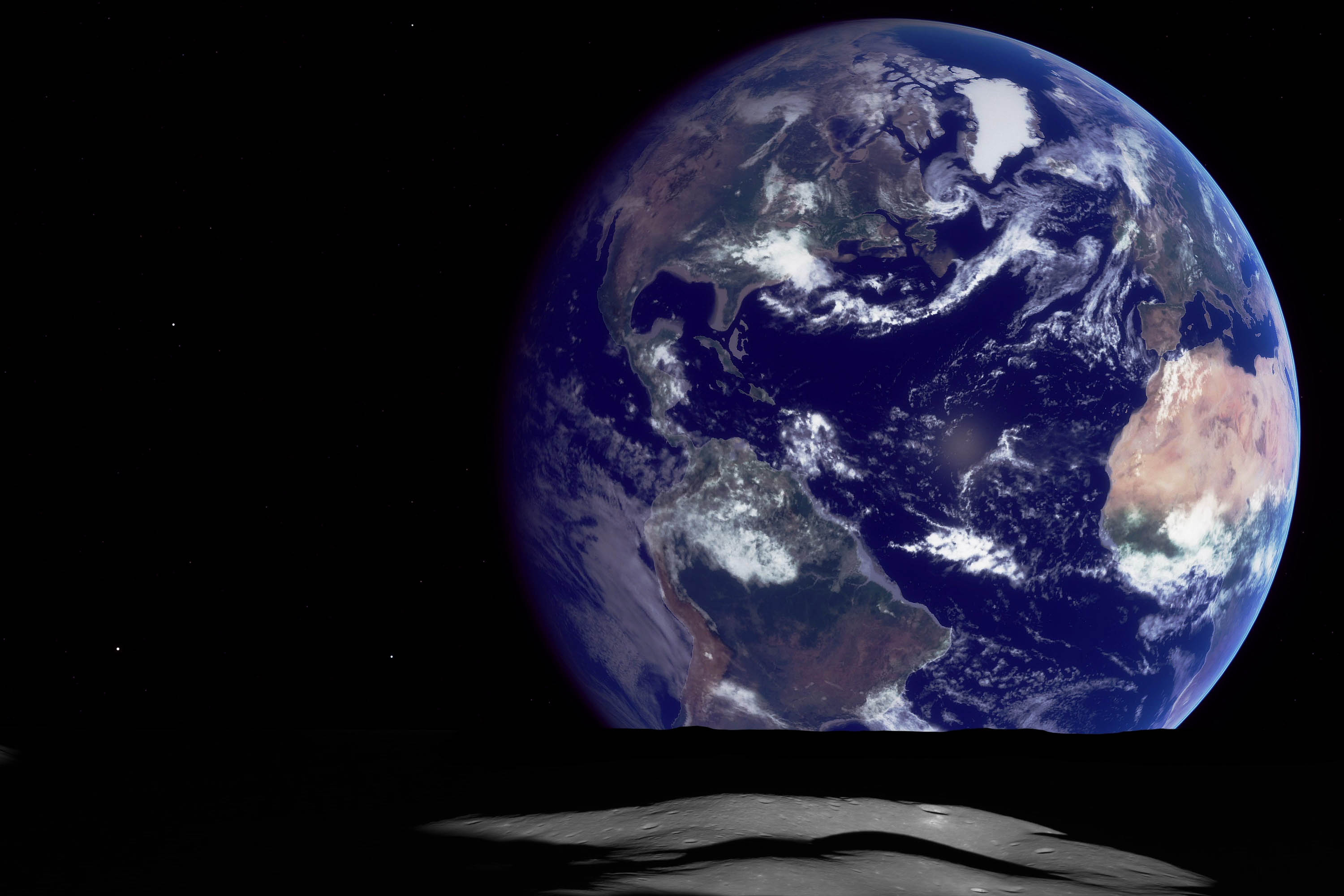 Questions, that have to be answered before the project could be realized:

Question #1: where is the perfect position of our static camera?

The software Space Engine gives you the opportunity to fly to many massive objects in the known universe. You can virtually go to the polar areas of the moon and search for a nice spot for a permanent observation of the earth. Most of the upcoming missions will go to the south pole, while water depots might be bigger there. I'd prefer to go to moon's north pole, while earth would be visible facing north on the top of the picture. With Space Engine I found a nice spot close to Hinshelwood crater, that gives you the visiblity I have rendered in the videos above. The spot would be: 88°50'48" North and 63°44'48" West: 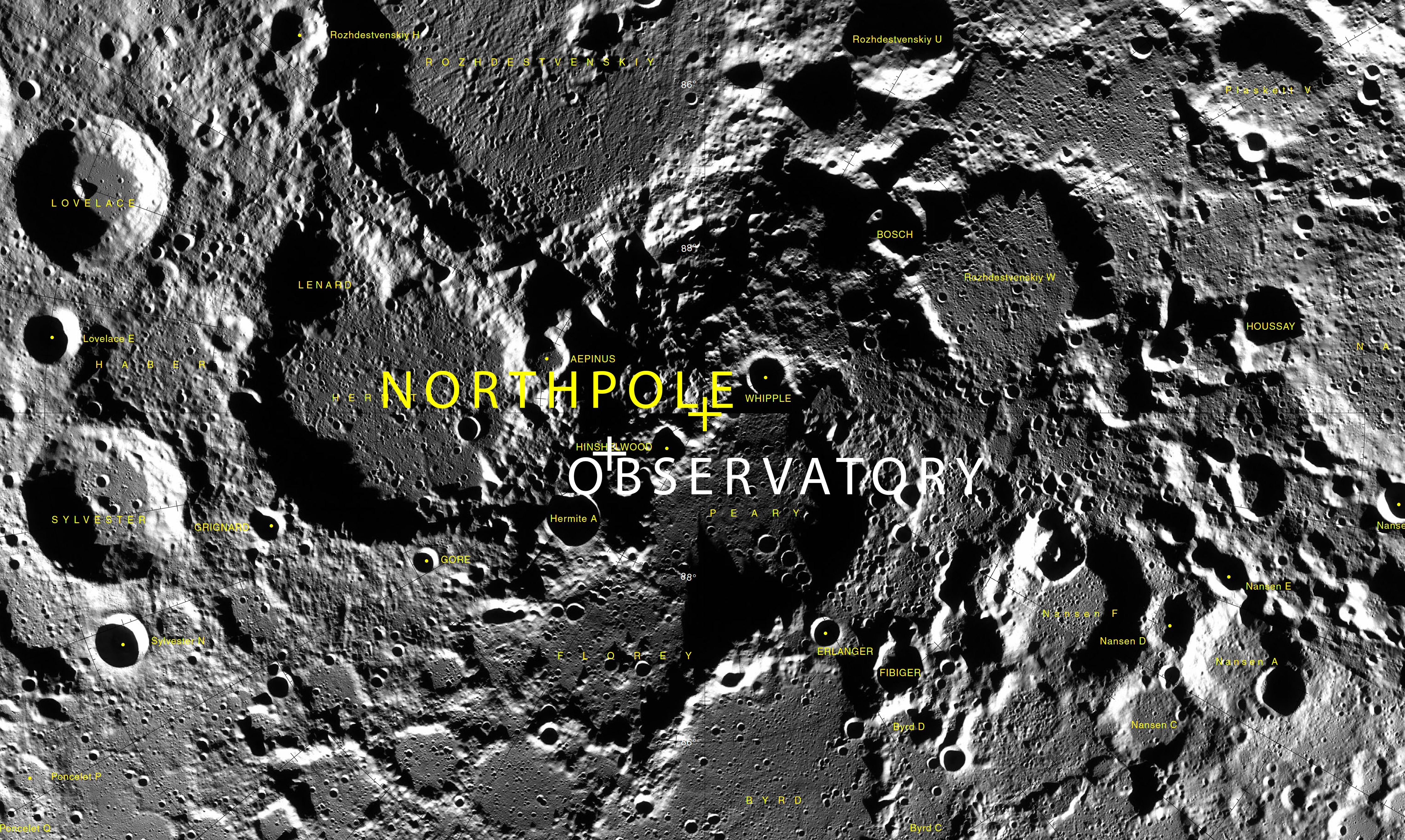 Question #2: What kind of camera should be installed?

Actually NHK is testing the broadcastabilty of 8K-live-TV-programmes. Thus, cameras capable of recording this picture qualtity are already in the market.


Question #3: What kind of transport will be chosen for our camera?

Should a lunar lander put the complete installment directly to the position, that we have chosen in advance, or is it better to put a vehicle there and drive around finding the best spot for the camera?


Question #4: How can we feed this installment with energy?

The polar regions of the moon have another benefit: they are more or less always lit by the sun. There is an up- and downwards movement of it, but this could be compensated with a higher elevation of a rotatalbe solar panel.


Question #5: How could the video straem be transmitted to earth?

There are some interesting projects about to be deployed to have a perament carrier of communication between earth and moon in the upcoming years. There could either be used a laser beam, or satellite communication to get a video stream established.


Question #6: Will we only show one resolution of the complete area or will we follow earth in a close-up?

Even while the moon is tidally locked he is wobbling around, leading the earth dancing left and right in the moons sky. Either the camera shows the complete dancing area with less details of the earth visible, or the camera lens is following earth in a very close-up shot 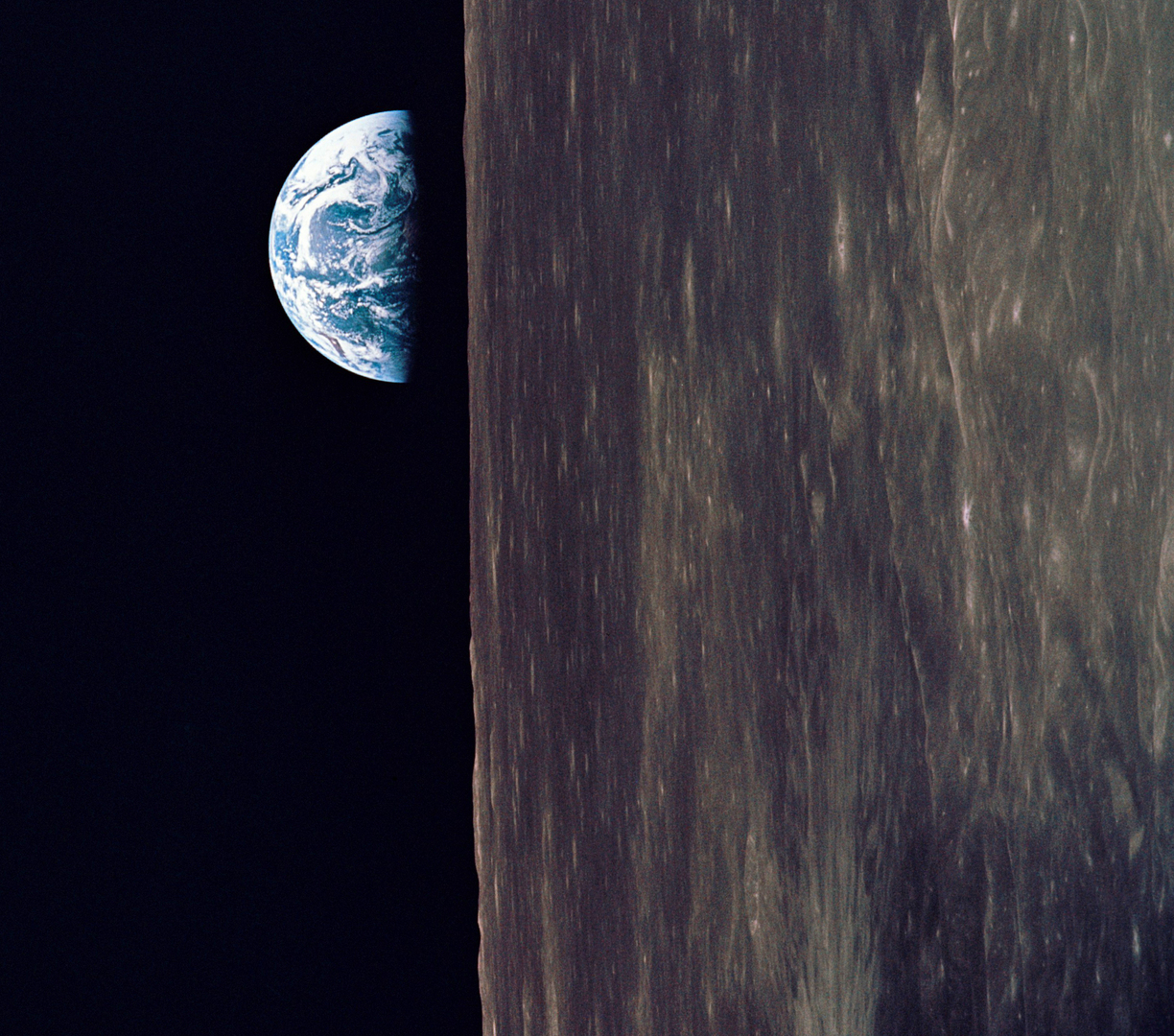 This was the first time our human race was able to see our planet from an other world. You see the earth rising above the lunar horizon. The picture was taken from the Apollo 10 Lunar Module, looking west in the direction of travel. 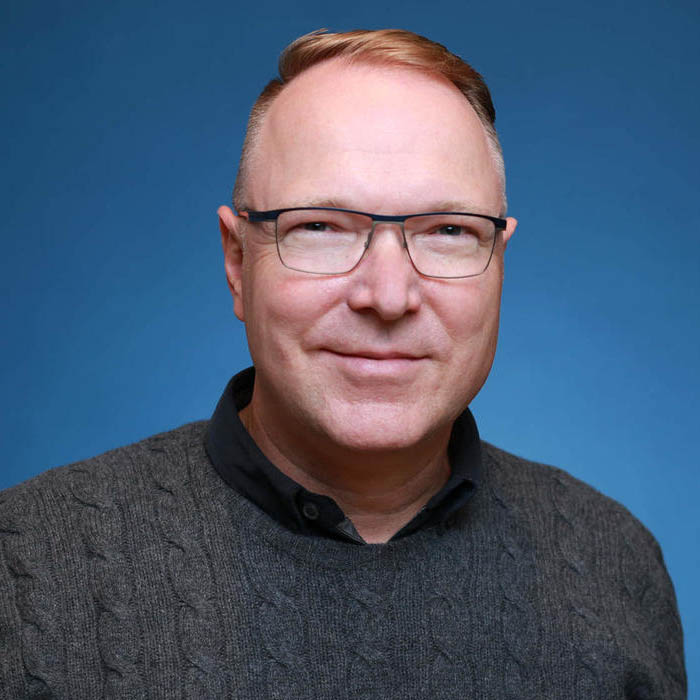 Roland was born 1967. He has been watching the Apollo 17 mission live on television when he was five years old. Since that time he was trying to watch all space mission launches that were ever broadcasted live in television. After discovering science fiction movies, he decided to work for the entertainment indurstrie and became a TV-producer. When working for a big german news gathering production, he was wondering why there is no permanent live broadcast already established on the moon. 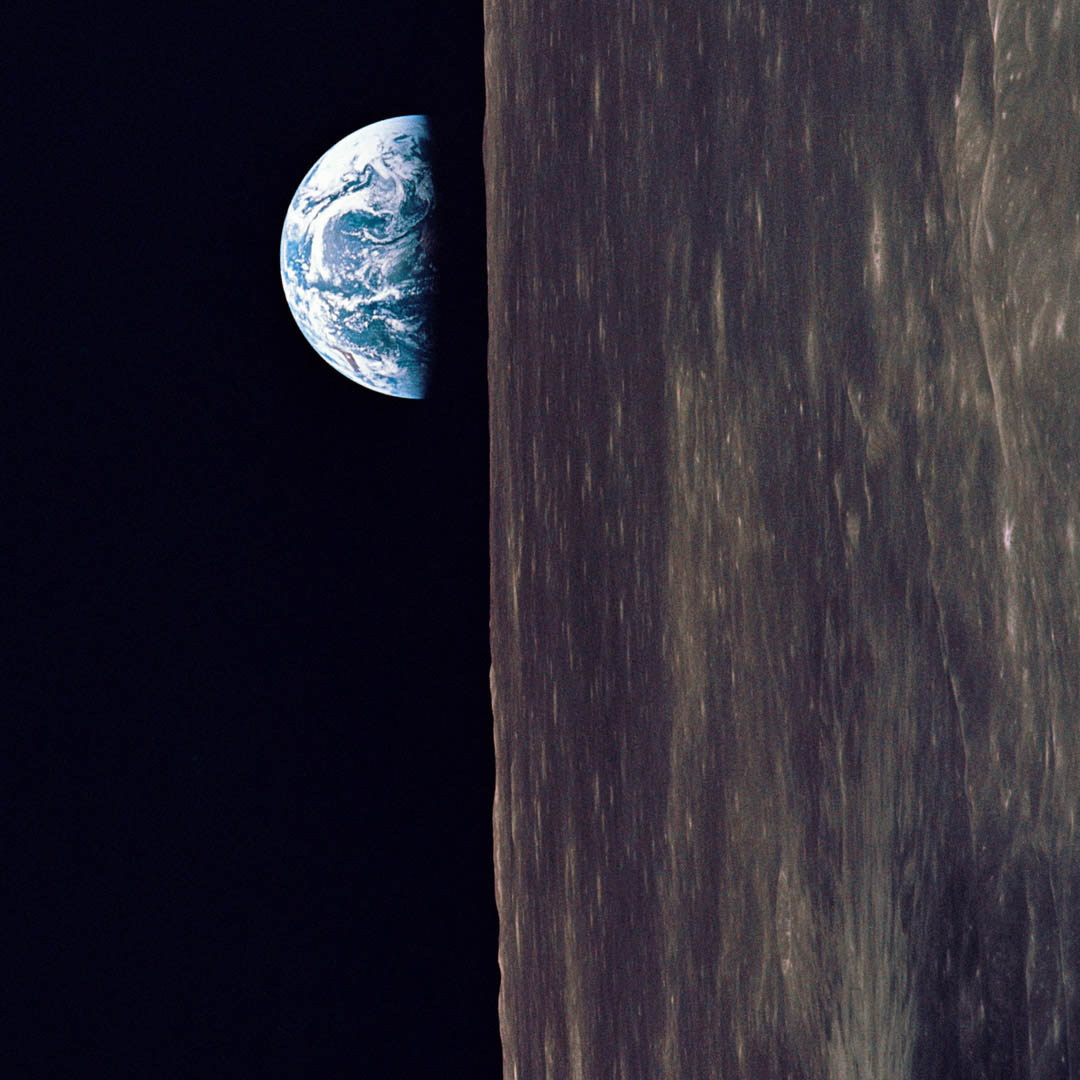 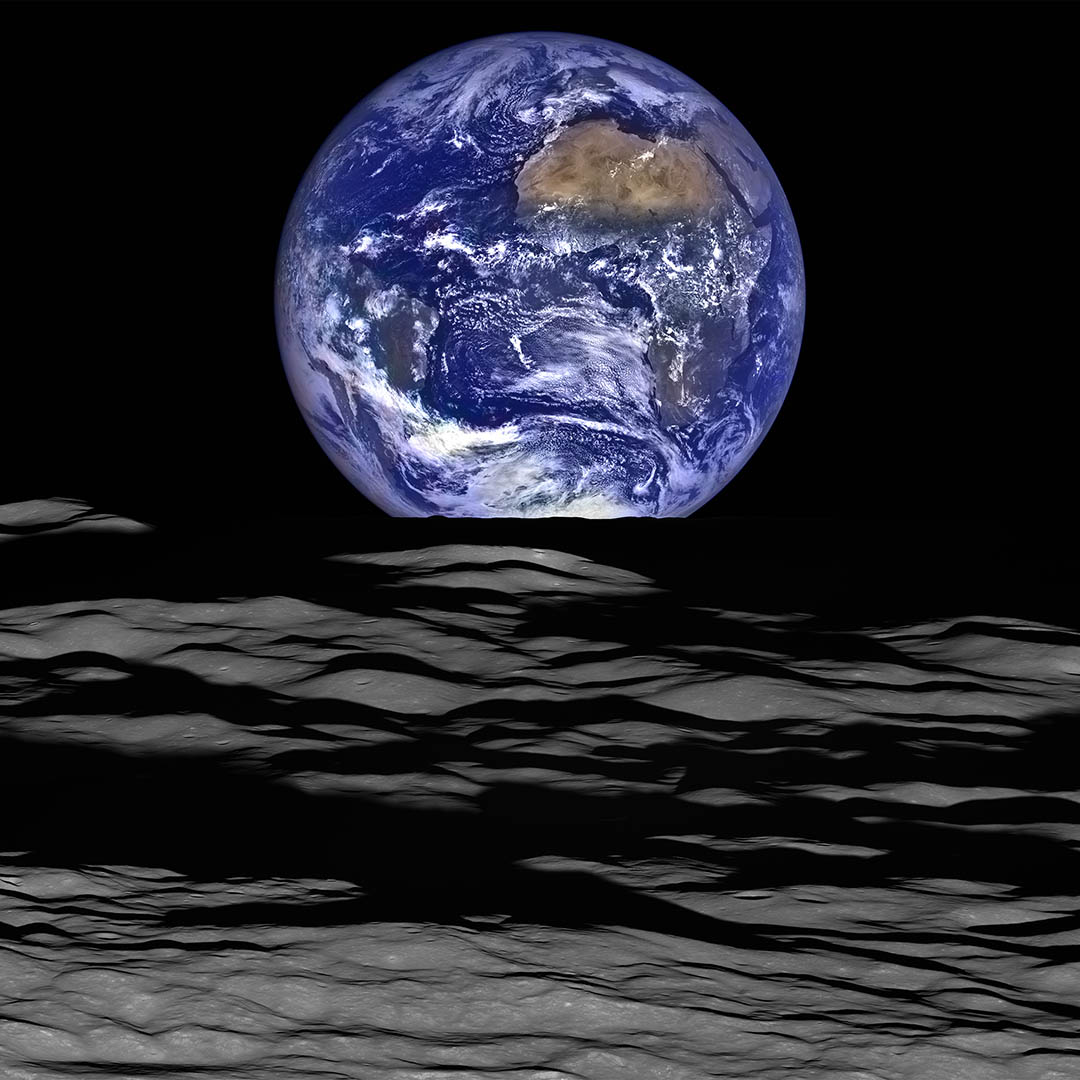 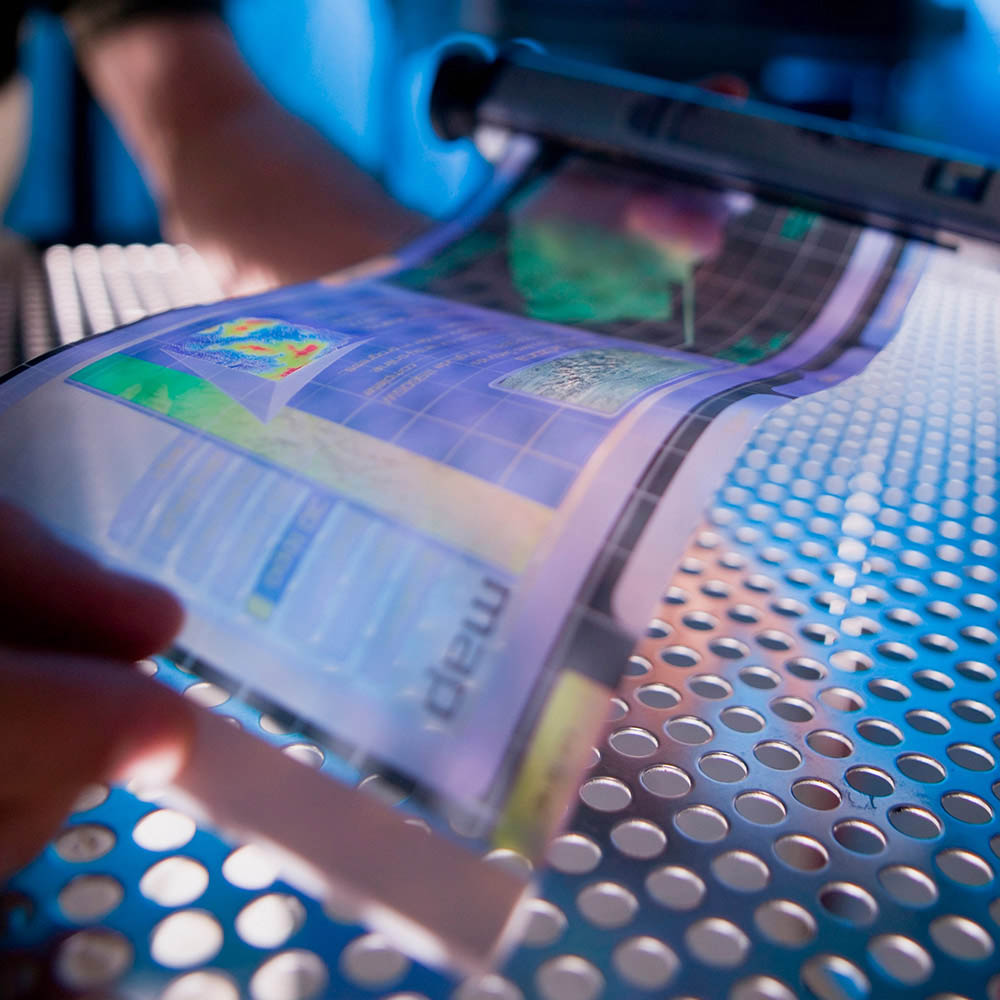 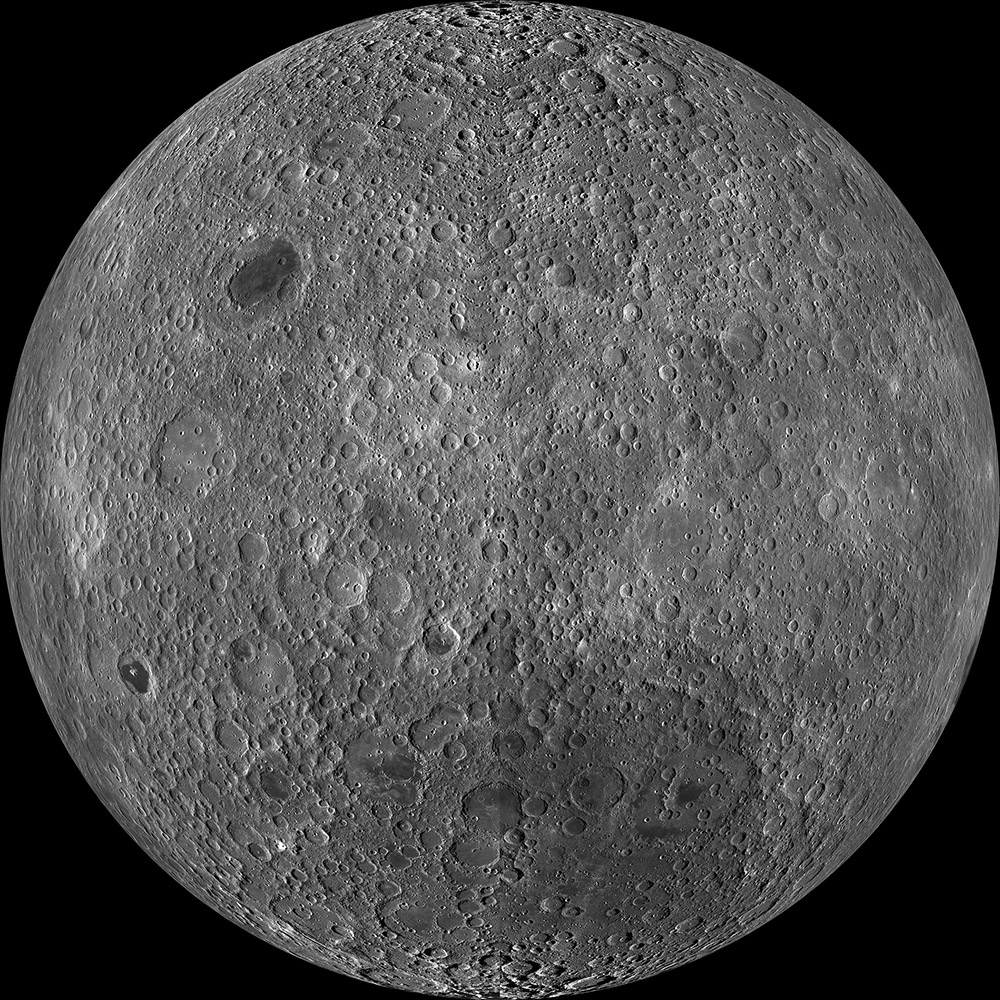 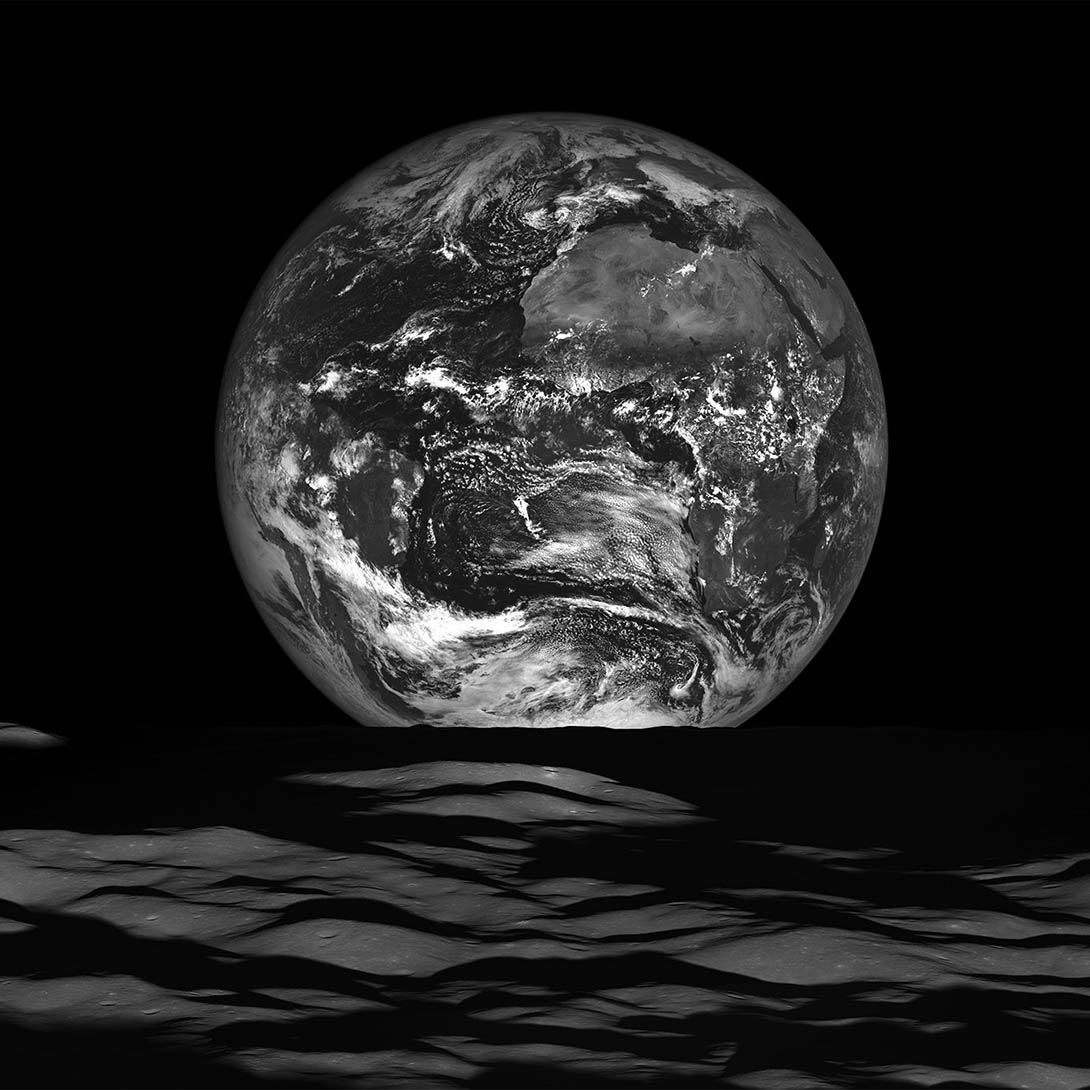